by Julian Maurice
The Koha community is proud to announce the release of Koha 3.22.7. This is a security release and contains many bugfixes.

The full release notes are available at
koha-3.22.7 Release Notes

by Brendan Gallagher
It is with great pleasure that we announce the release of Koha 16.05, a
major release of the Koha open source integrated library system.

Koha 16.05 is a major release, that comes with many new features and
enhancements.

Debian Packages will soon be available in the repository.

Thank you to everyone who helped make this work! Koha!!!

Please note – Ubuntu 16.04 support is still WIP and isn’t supported at the
moment, due to stricter MySQL version 5.7. All installs and updates should
be done on versions previous to MySQL 5.7.

The Swedish Koha User Group now has a presence online at http://koha.se/en/.

The Swedish Koha User Group consists of a number of libraries in Sweden that have implemented, or is in the process of implementing, Koha. The group also welcomes libraries and private individuals that are interested in Koha.

The user group was established during a meeting at Stockholm University Library on February 17 2016 and today consists of 19 Swedish libraries. The members co-operate in a number of task groups with issues such as translation, Swedish documentation, Interlibrary loan (ILL) support, and also furthering development of Koha.

The aim is to meet twice a year and in between the meetings collaborate using digital platforms. The user group is organized as a loose network of libraries (and individuals) governed by a steering committee, which has the task to coordinate work within the group.

Would you like to know more about the user group?

Add Your Library to the Roster!

Help us keep our online rosters up to date! Add your library to the following lists:

Joy Nelson goes over Linked Data and BIBFRAME.
Galen Charlton discusses the natural and unnatural problems in the domain of library software.

Vimal Kumar has two how-to articles for you this month:

If you weren’t able to make it to Greece this year you can still catch the presentations — they will be streamed live!.

To watch the presentations via live streaming video, head over to http://kohacon2016.lib.auth.gr/ May 30th.

AMICAL: Unleashing the Power of Koha

by Romana Franziska Wallner
On May 13th , Stefano Bargioni ran a technology showcase with the title, “Unleashing the Power of Koha” at the 13th AMICAL meeting and conference which was hosted by The American University of Rome. He illustrated the features of Koha to a group of AMICAL participants. AMICAL, founded in 2004, brings together 25 institutions of higher education located in 20 countries across Eastern, Central and Western Europe, West and North Africa, the Middle East, Central and Southern Asia, and Russia. by Koha Gruppo Italiano. 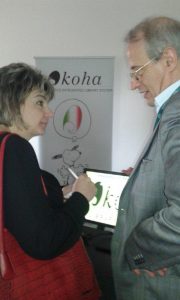