It includes 5 enhancements and 76 bugfixes.

by Frédéric Demians
The Koha community is proud to announce the maintenance release of Koha 3.20.8.

by Mengü Yazicioğlu
I’m glad to share that we successfully migrated old 2.x Koha to new one, 3.20. I should also say that this a quite derived version of 3.20, we have added many new features,
new modules and changed a lot of codes for the use of public libraries so we may call this Koha version as Koha — Devinim.

We’ve migrated 1,220,000 active users, 13,700,000 items with active 900 libraries of 1126 public libraries all cities of Turkey. We use 14 servers for all production and 4 servers for test environment. We use MariaDB and Galera Cluster with 4 nodes, 8 apache servers and 1 zebra server. We plan to cluster zebra server in the future, it cannot perform very well for this kind of huge installation.

During migration, we also cleaned some dirty data, this was also a big issue for 13m items. We’ve done many tests before going live.

Nicole Engard created a video tutorial for you explaining how to use koha sandboxes to sign off on patches.
Let Rocio Jordan show you how use MarcEdit to create koha items.

by Γιάννης Κουρμούλης
We are pleased to announce that Registration and Call for Proposals are now open for Kohacon16!

Developers, technical support staff, librarians are invited to share their experience by contributing with a presentation proposal based on their knowledge, ideas, best practices and even mistakes! (Please note that all presentations will be in English).

KohaCon16 will be organized by the Library & Information Centre and will be held at the Aristostle University of Thessaloniki on 30 May – 4 June 2016. For detailed information and updates, please visit the KohaCon16 site.

by Amit Gupta
Informatics is pleased to present National Koha Conclave – a two day event
on Koha and Indian Libraries scheduled on 17th and 18th February 2016 at
Bangalore. The event will be inaugurated by Mr. Chris Cormack (New
Zealand), the original developer of Koha. Chris will also be presenting an
advance level half-a-day workshop on Koha during this two day event. The
event will witness several eminent speakers from the Indian Library
landscape and Koha experts through plenaries, panel discussions, case
studies and future development needs and opportunities on Koha. The event
will be attended by existing and prospective users of Koha.

Please mark your calendar and block your dates for this event – National
Koha Conclave and register your participation at the
link: http://informaticsglobal.com/kohameet

Since limited seats are available, please rush your registration.

The February general IRC meeting will be held on the 3rd at 10:00 UTC.

The February Development IRC meeting will be held on the 2nd at 15:00 UTC.

by Sonia BOUIS
On The 14th of January, a presentation day about Koha was held in Paris, organised by the french association, KohaLa. The morning was dedicated to a demonstration for people who are interested in Koha but don’t use it yet. In the afternoon, new features of the 3.22 Koha version was presented by Frédéric Demians and Julian Maurice. 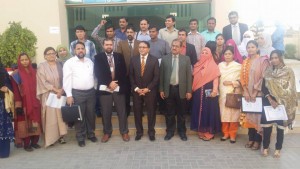 The workshop ended with a vote of thanks. Souvenirs were presented to all participants by Mr. Farhat Hussain, Assistant Professor, Department of Library and Information Science, University of the Karachi, Karachi and Commodore Mohsin H. Malik TI (M), Director Bahria University Karachi Campus, Karachi. 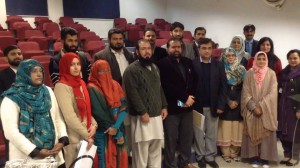 The Chief Guest for the Opening session was Dr Midrar Ullah Sb.. Midrar Ullah Sb. received his Phd from the University of the Punjab Lahore and paramount LIS scholar in Pakistan. His speech was motivated by the importance of automation in libraries. He suggested creating a Koha group in order to discuss issues in the LIS Koha community in Pakistan.

The Training session was conducted by Sher Afzal Khan, Chief Librarian at the Bahria University Head Quarters. The closing session chief guest was the famous Mr Waheed Hussain Sb. Mr Waheed Hussain is the Senior Anchor Person at Roz Television and Project Director of Media Studies Department at Bahria University. He also served in PTV, Waqat News TV, and Business Plus on various senior Management positions. He was impressed to know that people from across the country participated in this important session.

The January Fundraising Committee Meeting was held on the 27th at 19:00 UTC.