Read the respective release notes by clicking the revision number.

The Debian packages are usually available within days after the release.

For all past IRC meetings see the following links or the Koha Community calendar.

KohaCon21 international conference was being held at the National Library of Pakistan from 13 to 18 December 2021. KohaCon is a yearly get together of the Koha Community. The first Koha Conference was held in Paris, France in 2006. This year, with the efforts of the Pakistani Koha Community (especially of its President, Mr. Sher Afzal Khan), Pakistan was voted to host the international Koha Conference. This is a moment of great pride for all Pakistanis, especially for library science professionals and academia, as it will not only improve the soft image of Pakistan, but it will also establish its credentials as a leader of the Free Open Source Software (FOSS) movement in the world. The inaugural session started on 13th December with the recitation of the Holy Quran and national anthem of Pakistan. The KohaCon21, being held hybridly, was attended by a large number of delegates from all over Pakistan and from around the world physically as well as through online mode. Mr. Zakria Qasmi, the session secretary, compared the whole event.

Mr. Mudassar Mushtaq, the director general of the National Library of Pakistan (NLP), welcomed the delegates and briefed them about the NLP. Thereafter, Mr. Sher Afzal Khan, the conference secretary, briefed about the importance of FOSS, especially Koha, and its pivotal role in modernizing the libraries around the world, especially in the resource constrained developing world. He said that the main purposes of these annual international KohaCons are exchanging experiences in new functionalities; training and bug squashing; promoting collaboration to enhance the use of open source integrated library system (ILS) Koha; and to encourage new developments in Koha. He also said that these conferences play a vital role to enhance regional, national and international cooperation in respect of knowledge and resource sharing. Afterwards, a recorded address of the conference chair, Prof. Dr. Khalid Mahmood (Dean, Faculty of Information and Media Studies, University of the Punjab, Lahore), was played. He also welcomed the delegates and paid tribute to Mr. Sher Afzal Khan for his tireless efforts in promoting Koha, us, saving millions of rupees that would have been needed to purchase commercial software. He also lauded his efforts to bring KohaCon21 to Pakistan which will enhance our country’s image and standing in the world. Then, Chief Guest of the inaugural session, Honourable Ali Muhammad Khan (Minister of State for Parliamentary Affairs, Government of Pakistan), addressed the delegates. He stressed the need to take libraries to the users, especially to the youth, using ICT tools. He summed up his address in a point that “readers are leaders”, by giving his own example and sharing his experiences of libraries. 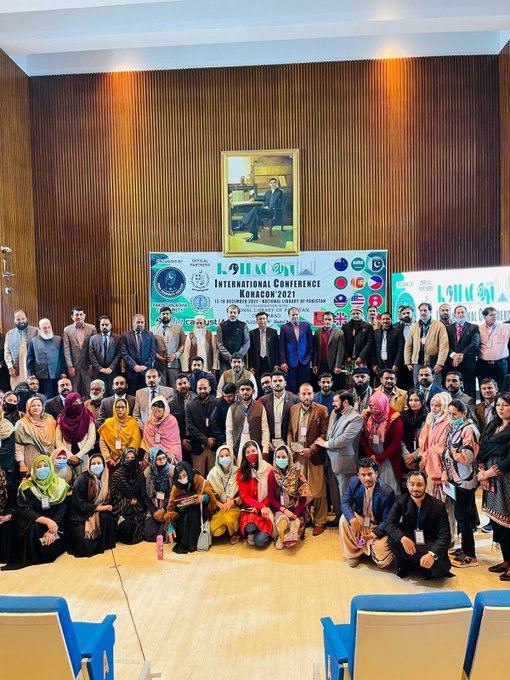 More than 20 national and international researchers, practitioners, academicians, and library & information science professionals presented their research papers; and shared their experiences regarding Koha during the conference. Around 200 people, including library & information science professionals, IT professionals, educationists, dignitaries; and representatives from more than 18 countries including USA, Canada, India, Turkey, Philippines, Saudi Arabia, Nepal, Sri Lanka, New Zealand, Bangladesh and Cyprus, participated in this conference. The closing session of the conference on 15th December also started with the recitation of the Holy Quran by Mr. Zakria Qasmi. The conference report was presented by Mr. Sher Afzal Khan. Thereafter, the guest of honor of the session Mr. Nasir Jamal Khan (Chief Operating Officer, COMSATS Internet Services) announced pro-bono provision of the internet as a gift to the NLP. Engr. Qaiser Nawab, founder and chief executive officer of “THE Society – Together for Health and Education” has participated as a guest of honour in the closing ceremony of the first ever international conference KohaCon21 with a theme of digitization of libraries in the developing world that happened in Islamabad, Pakistan.

In his address, Mr. Nawab urged the youth to take active part in readership for effective leadership to bring sustainability in the world. Today’s world is a world of information and knowledge, therefore the young people must equip themselves with modern digital learning tools and open source technologies. Open Source applications provide easy access to the sources of knowledge. He added . Afterwards, Dr. Khalid Mahmood, the conference chair, candidly talked about the history of library automation in Pakistan, especially his own experiences, and the contributions made by Ms. Bushra Almas Jaswal (renowned and seasoned library professional of Pakistan) who was also present as a delegate. He, again, lauded the efforts of Mr. Sher Afzal Khan, and lluded him to Koha which is open source, freely accessible and always ready to help others. Thereafter, the chief guest of the closing session, Honourable Shandana Gulzar Khan (Member of the National Assembly of Pakistan and chairperson of Commonwealth Women Parliamentarians) addressed the delegates. She also stressed the need to bring libraries to users, especially to women and to the people of far flung areas who cannot access physical libraries. She not only congratulated Mr. Sher Afzal Khan and the organizers of KohaCon21, but also showed her surprise that such an international event is being organized by a few individuals without any financial support by the government of Pakistan. Then, Mr. Javed Iqbal (Deputy Director, NLP) briefed about the NLP, and talked about the demand of library users to make the NLP a 24/7 library which can be fulfilled if adequate funds and human resources can be provided by the government to the NLP. He also invited all the delegates to visit the NLP and explore its collections. 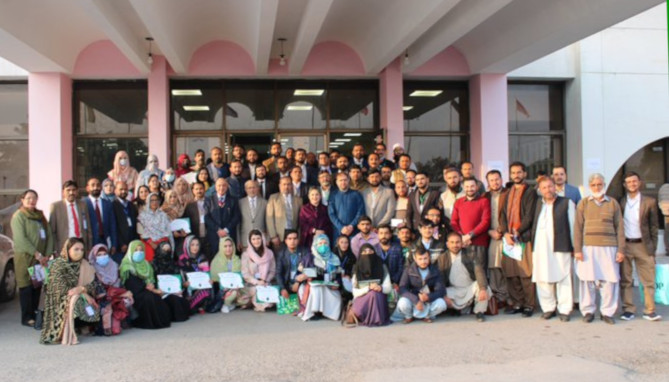 The three-day conference concluded after shields to the guests, organizers, and the delegates. Mr. Sher Afzal Khan the organizer of the conference shared the details of the sessions and highlighted the outcomes of the conference. Mr. Nasir Jamal Khan COO, COMSATS Internet Services during his speech appreciated the organizers and announced to provide complimentary internet service to the National Library of Pakistan. In the end, certificates and shields were distributed among the participants of the conference and a group photograph was taken outside the library building. A two day hackfest also held as part of KohaCon21 from 16 to 17 December. The first and second day was observed as hackfest day and the two days’ sessions were held at the computer lab of National Library. Different participants of the Kohacon21 participated in both days. Mr. Sher Afzal, president Koha Pakistan and conference chief organizer guided and trained all the participants about the hackfest.

The Koha wikis, librarian page, Koha manuals, Koha translation, Koha newsletter, Bugzilla was introduced and guided with all of the participants. We are very much thankful to all our sponsors especially Catalyst New Zealand for their great contribution and making this event successful. We are also very much thankful to the organizers, participants, HODs, LIS community, guest, chief guest and guest of honor for participants in the international conference. The last day of the KohaCon21 was celebrated as cultural day but due to the extraordinary moment of the OIC conference in the capital the cultural day was postponed, however the participants visited and explored the world’s second most beautiful capital by their own arrangement.

For complete pictures, information, and other details please visit the following links: