by Martin Renvoize
Hi everyone, I thought I’d start with a quick introduction. I’m Martin, working for PTFS-Europe, and have been lucky enough to be supported in stepping forward for a second cycle as the community release manager.

I thought it would be a nice idea to add a little ‘update from the release manager’ section to the newsletter this cycle outlining our progress and goals each month.

As is the usual pattern, we have been concentrating on bugfixes this first month of the new cycle and have, at the time of writing, worked through 31 reports. The team is aiming to start working through enhancements again during January.

We are hoping to work through a number of refactoring bugs early this cycle, paving the way for more modern and maintainable code. There is also ongoing work happening in the accounting, course reserves, notices, translation and circulation rules areas of Koha and I’m excited to see where they go.

I’d like to give special mention to our heavy hitters of the month to date, Joonas Kylmälä, Marcel de Rooy, Jonathan Druart, Andrew Fuerste-Henry and Owen Leonard. Thank you for your efforts in Signoff and Quality Assurance keeping the project moving forward. Can you knock some of these off their top spots, it would be great to see some new names in this list next month.

Finally, Lisette Scheer, who has been testing and signing off on patches for a little while, submitted her first Patch. Great to have you aboard.

As ever, statistics and areas to concentrate on are all listed on the dashboard.koha-community.org. It always makes for interesting reading and is the best way to get a quick look at the current state of play.

by Stefano Bargioni
At the library of the Pontificia Università della Santa Croce, we introduced GeoLock, a tool to fill in 370 auth tags [1].

Subfields related to places (a,b,c,e,f,g) are associated to a Javascript/jQuery code that, on subfield focus, opens up a dialog with an autocomplete field based on Wikidata (default) or Geonames APIs. After entering the first letters of a place, the cataloguer can choose the correct place and automatically GeoLock fills in subfield ‘a’ (or whatever) with the Italian label, subfield ‘2’ with the code of the chosen source (‘wikidata’ or ‘geonames’), subfield ‘0’ and subfield ‘1’ with the correspondent URI and RWO.
For non-US places, the form of the label is “place (country)”, while for US places is “place, state (United States)”.

GeoLock is a proof-of-concept to show how much work an ILS could save accessing rich external resources, while adding linked data to the catalog. It calls a Perl script that accesses both sources and returns data in JSON format. 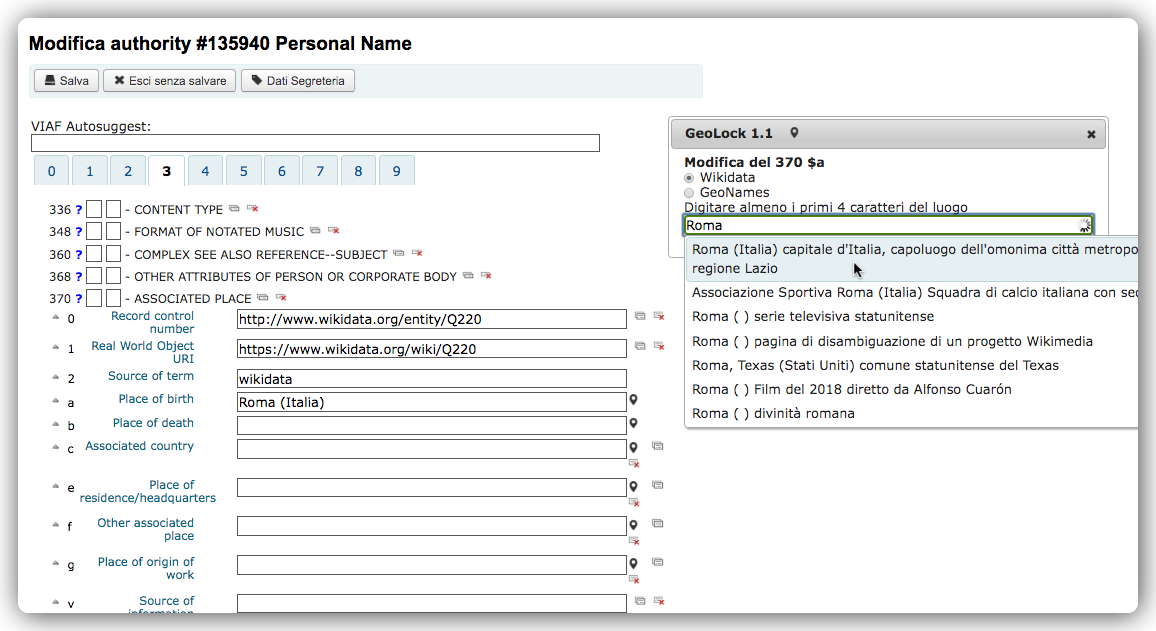 by Joy Nelson
The Koha community is proud to announce the release of Koha 19.11.01.

This is a maintenance release containing 30 bugfixes

The full release notes are available at https://koha-community.org/koha-19-11-01-release/

Debian packages will be updated within a few days

That just leaves me to wish everyone Happy Holidays and express my thanks to everyone involved in this release. Particularly Nick Clemens, Lucas Gass, and Martin Renvoize for stepping me through the various hoops in getting this done.

by Lucas Gass
The Koha community is proud to announce the release of Koha 19.05.06.

The full release notes are available at: https://koha-community.org/koha-19-05-06-release/

Debian packages will be available soon.

Thanks to everyone who contributed.

by Martin Renvoize
The Koha community is proud to announce the release of Koha 18.11.11.

The full release notes are available at: https://koha-community.org/koha-18-11-11-release/

Kelly McElligott and Jessie Zairo have added some great new tutorials to their Monday Minutes series:

Kelly McElligot created the following tutorials for you:

Jessie Zairo has a report that will tell you what your patrons saved in 2019.

by Paul Poulain
Some already know, some are asking, so I’m publicly announcing that the 2020 hackfest in Marseille will be march, 23rd-27th

You can book your flight, your train, your horse or your bike. Or just reserve the dates on your agenda.

The January General IRC meeting will be held the 8th at 20:00 UTC.

The January Development IRC meeting will be held the 15th at 14:00 UTC.

The January Documentation IRC meeting will be held the 9th at 14:00 UTC.

The December General IRC meeting was held the 11th at 14:00 UTC.

The December General IRC meeting was held the 6th at 13:00 UTC.

The December General IRC meeting was held the 12th at 19:00 UTC.