AuthorityBox added to the display of bibliographic records

by Stefano Bargioni
The Library of the Pontificia Università della Santa Croce, Rome, has added AuthorityBox to the display of bibliographic records.
AuthorityBox, an example of semantic enrichment, is an “accordion” composed of an infobox for each personal name related to the record.
An extra infobox is for settings, help and about.

Each infobox may contain:

AuthorityBox is an extension of Koha. It is based on VIAF id [1] and other data from MARC21 authority records, in compliance with RDA Cataloguing Guidelines [2].
Links are composed, directly or indirectly, on the VIAF id or the authority id. For instance, the source of the picture is retrieved by the browser that accesses the SPARQL endpoint query.wikidata.org. For teachers of our University, without a page on Wikipedia, pictures are from a simple repository. 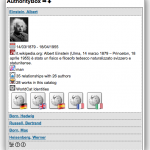 Jessie Zairo has some new tutorials for you:

Margaret Hade takes you on a caffeinated tour though some basic report concepts in Koha.

Take a look at these excellent tutorials from Kelly McElliott

We are very excited to have Ken Chad making a Keynote talk on “Community,
openness and directions for library technology”
Ken is a Library Consultant of many years’ standing (
https://www.kenchadconsulting.com/about/)

Marshall Breeding will be talking on “Koha: Assessing the impact of the
Global Community”

Chris Cormack will be giving a talk titled “Kia kaha, kia kotahi rā Our
strength is our unity”

On top of that there will be 20 other talks and 13 workshops.

You can download a pdf of the programme here (
https://docs.google.com/document/d/1POlIIKGQSBHhJKuafd9kzbXwF7LwP-euRYT2P58M56s/export?format=pdf)

There are currently 144 delegates registered, promising a good
international mix.

From Jason Robb
Original listserv post
*koha-US meetings are open to any and all.*

*Board Meeting -*
When: Wednesday, April 3rd at 10:30 am CDT (time converter)
Where: https://kslib.zoom.us/j/450230564
Agenda: https://docs.google.com/document/d/1Uu7n0XoikQ25pHXT_ZLUvJdEhnbfBFIIhfmTP5CZrv4/edit?usp=sharing

*Board meetings* focus on business-related matters and topics that would
otherwise slow down general meetings.

*General meetings* put an emphasis on Koha — bugs, issues, development
ideas, workflows — bring your problems and questions so we can discuss!
These meetings also include major organizational decisions and reports from
various committees.

Meetings are held via Zoom video conferencing. A microphone and camera are
recommended but not required. Zoom is available for Windows, Mac, and Linux
on desktops and Android and iOS on mobile devices. For help getting
started, visit: *https://support.zoom.us/hc/en-us/categories/200101697*

If you have topics for discussion at either meeting, please send them to
secretary at koha-us.org.

The May Development IRC meeting will be held the 15th at 14:00 UTC.

The May Documentation IRC meeting will be held the 9th at 14:00 UTC. 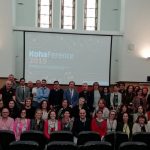 The III Kohaference of the Spanish Koha Community was held by the University of Cádiz (UCA) on March 21-22. During this two-day meeting a lot of user’s experiences, development proposals and enhancements were presented by experts in charge of a large variety of libraries and service companies.

The main conclusions reached by the attendees were as follows:

On the other hand, the KOHA implementation in the UCA reveals for the first time in Spain that this ILS is a powerful and suitable manager system for large libraries networks.

Finally, at the end of the conference, the Royal Library of Madrid was declared candidate to hold the IV Kohaference that will take place in 2020.

The program and the presentations of the III Kohaference are available on https://2019.kohaference.es/ 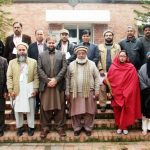 Koha Community Pakistan in collaboration with Directorate of Scientific Communications and Publications, National Agricultural Research Center Government of Pakistan organized a Two Days Training on Free & Open Source Integrated Library Systems (ILS) at NARC, Islamabad on March 08-09, 2019. It was a National Level training which was attended by the participants from across the country i.e. Islamabad, Rawalpindi, Gilgat Baltistan, Lahore and Khyber Pakhtunkhwa. The inaugural Ceremony was graced by the Director Scientific Communications and Publications along with other senior scientific officers of NARC.

The Inaugural Ceremony was started by the recitations from the Holy Quran. Mr Faheem Akbar Senior Librarian welcomes to all participants and gives an overview about the two days training workshop. Mr Sher Afzal President Koha Pakistan (Lead Trainer) introduced the Koha ILMS and brief about the Free Open Source Software. He further highlighted the activities of Koha Pakistan in the promotion of Free and Open Source Software in country. He also introduced the training, its objectives and methods which are being adopted for effective learning of Free and Open Source ILS. The Director NARC, in his inaugural speech, appreciated the efforts of Koha Pakistan and Mr Sher Afzal for organizing such professionals training and he also appreciated the participants coming from around the country to learn the modern cutting edge technologies. He also offered the NARC support to Koha Pakistan for future joint-venture trainings for the all 38 libraries of NARC and all others areas of professional development. The Objective of the workshop was to equip the librarians with the practical skills to use KOHA in the management system of libraries. The following modules were covered in the two days hands on training workshop by the Resource Person Mr Sher Afzal Khan and Faheem Akbar:

For further details about Koha Pakistan and team please visit the following links:

by Jesse Kah
I’m Jesse from Lemonjar Software Media Sdn. Bhd.
We have been a KOHA service provider in Malaysia for 11 years. This is the first time I write to the community. I’ve subscribed to the community mailing list and have been following on KOHA development.

Our main business is in Library Automation Equipment which is EM, RFID and Hybrid (EM + RFID) solution as well as System Integrator & Software Development.
Most of my clients are government bodies, and institutions (Government & Private). We have started to export our Koha integrated RFID equipment to the Philippines.

KOHA has been a challenging direction for libraries in Malaysia to adapt to over the last 10 years. However, due to the government’s budget constraints, the continued development of KOHA and the influence of KOHA community, KOHA ILS is now one of the main selections for library systems in Malaysia.
There are more and more libraries adopting KOHA one by one.

We started to bring awareness of Open Source, especially KOHA, to one of our state government starting in 2009 by providing training on KOHA installation and setup from scratch. That was version 3, with its difficult source install of the Perl module dependencies. Together, we also have the POC (Proof Of Concept) where KOHA is already able to integrate with RFID automation via SIP2 since then. However, end users find it hard to accept “Open Source” and our team has been working closely with Eugene Espinoza (Secretary of KOHA Community Southeast Asia) and his team to provide after sales advice and solution to end user since 2016. We support each other especially on data migration.

KOHA Lemonjar‘s target is to gather all the KOHA teams within Southeast Asia and become a service hub that end users can depend on after adopting KOHA.

This year we have successfully had the MOU with one of the state public library, Perak State Public Library Corporation to organise a series of (paid) KOHA hands-on training to end users within Malaysia. We are aware that KOHA adoption in Malaysia is slow. Most of the Libraries that have installed KOHA are not being trained and that’s the main objective of the MOU.

The first training was conducted on the 4th March.

We have 4 types of KOHA training we offer are:

The training was very successful! The Penang Public Library Corporation and Institute of Land and Survey (INSTUN) joined the training and the response was excellent!

I can’t share all the photos with you, however, some of them have been published on our website at https://www.lemonjar.com.my/
This training is an exciting event and to me it’s a breakthrough of ‘KOHA trend’ in Malaysia.
We hope to share this info to KOHA Community. From the website, the community can also find our self-developed library automation products.
All of the products are developed based on the SIP2 protocol within KOHA. 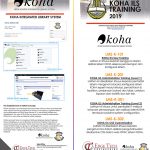 Between 26 to 28 of March 2019 a total of 150 delegates from Sweden, Norway, Denmark, and Finland met up in Skövde to discuss Koha and open source. The Swedish Koha User Group invited to its seventh biannual meeting and both presentations with speakers from Finland as well as open space discussions, workshops, and hackfest were held. At the same time, an open afternoon about open source were held. This session was open to non-user group members interested in Koha and Open Source. Key Note speaker for the meeting was Professor Björn Lundell, expert on open source in public sector. The meeting days were concluded as being successful and provided the delegates with new impulses and impressions to be taken back home to their own organisations.

The full meeting notes (In Swedish), including recorded presentations, is found here: https://koha.se/moten/svenska-kohanatverkets-sjunde-anvandarmote-26-28-mars-2019-i-skovde-med-bibliotek-mellansjo/

The April General IRC meeting was held the 3rd at 14:00 UTC.

The April Development IRC meeting was held the 4th at 14:00 UTC.

The April Documentation IRC meeting was held the 4th at 14:00 UTC.